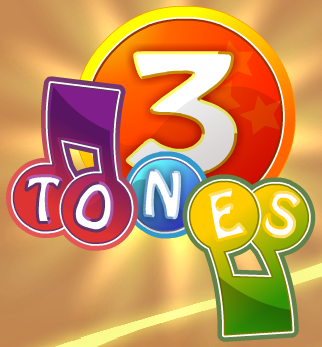 3Tones is a Match-Three Game by Vast Studios released in 2009 for computers running Microsoft Windows. You have to make matches shown in a bar at the bottom of the screen by dragging block that are adjacent. Once it's done, the blocks are removed from the gameboard and the tray, as the score counter goes up. You can use multiple power-ups to gain an advantage. There are multiple play modes including Career (beat a specific objective before the song ends for a badge), Arcade (see how long you can last before the tray is full), and Puzzle (make specific matches to clear out the game board). You can listen to one of 30 songs provided with the game from several different artists or upload your own soundtrack as an in-game playlist.