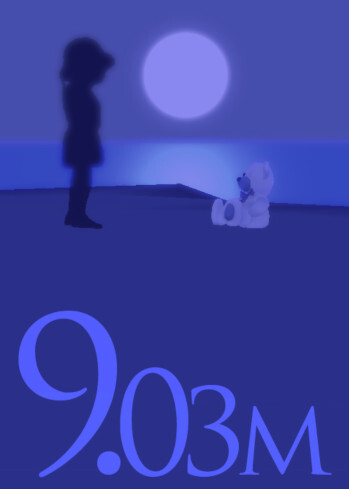 9.03m is a short walking simulator Video Game by Space Budgie. It was made to help with the relief effort for the people effected by the Tohoku Earthquake and Tsunami in 2011

. All royalties from the game went towards funding the effort.

In 2011, Tohoku, Japan suffered from a devastating Earthquake, and a tsunami that followed afterward. The death toll from that event totaled over 15,899. The media listed them all as numbers and figures.

This game is to remind us all that those figures are people who have loved ones left behind.

In 9.03m, you play some Featureless Protagonist on the shore of Baker Beach

, San Francisco. Debris from the tsunami has washed ashore, and the protagonist is to find all the objects and find the butterfly on each one, which represents the soul of the object's owner. With each one you find, the tide goes out, allowing you to find more objects washed up on shore.