Ripping Off the String of Pearls 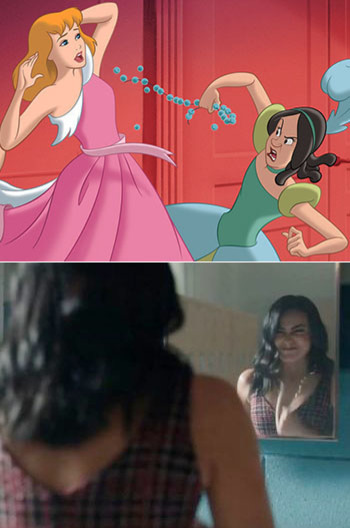 Above: Inflicting this trope on another
Below: Self-inflicted example
Advertisement:

When a lady in a visual medium is wearing a lovely string of pearls around her neck, the odds of a Dramatic Necklace Removal occurring skyrocket. Why? Because removing jewelry with such force that it breaks is great for drama, and the individual pearls look awesome in slow motion as they clatter to the ground.note In Real Life, genuine pearls are individually strung with tiny knots between each one precisely so that this trope doesn't happen. The knots also prevent the pearls from being damaged by rubbing against one another. Similar to Priceless Ming Vase or Ashes to Crashes — when you see this item, you can expect it to be broken.

While a Dramatic Necklace Removal fixates on the retrieval of a Plot Coupon in the form of a necklace, this trope focuses on the symbolism of a pearl necklace coming undone by force. As such, it leans on the symbolic connotations that pearls have: pearls are considered a feminine gem, and are often used to represent classic beauty and elegance in a character. note In modern western fashion, a single pearl in a tie pin or on a cuff link is an acceptable accessory for a wealthy man — but you'll never see a guy wearing a string of pearls as an accessory unless he's Crossdressing, due to how strong the association between pearls and femininity are. Strings of pearls can also indicate that a character is wealthy (usually Old Money) or at least connected to the upper class. Any girl wearing a string of pearls is likely on her way to (or just returning from) a fancy event. If she's an Action Girl wearing them in a dangerous situation, viewers might expect that she's about to be Kicking Ass in All Her Finery.

Like the Insignia Ripoff Ritual, this trope generally comes in two flavors:

This trope can also work with beaded necklaces, but the impact is diminished when the beads are made of less precious stones, glass, or macaroni.

Often used as a Symbolically Broken Object. Can be played for laughs if the characters break a necklace and then scramble to pick up the individual beads afterwards.