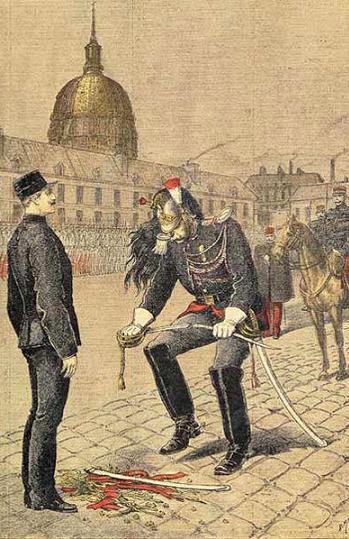 The Degradation of Alfred Dreyfus,

Le Petit Journal, 1895
Newman: You're a disgrace to the uniform. [rips off badge]
Jerry: You know, this is your coat.
Newman: ...Damn!
— Seinfeld, "The Andrea Doria"
Advertisement:

That's it. You've had it with the organization you work for. They've made you work too hard, they've grown corrupt, or they've done something morally questionable in pursuit of their goals. You're quitting, but you don't just want to turn in your Two Weeks Notice and walk off the job. You want to let your employers know just how disgusted you are with them. What better way to do that than by walking up to them, tearing off your chevrons, ranking insignias, and other badges of office and throwing said items into their faces? (If you've recently been awarded a Medal for Valor or for some other reason, feel free to rip that off and cast it dramatically to the floor as well. Your employers should get the message.)

Alternatively, you could be the leader of a military organization who finds themselves dealing with a lazy or corrupt member. Perhaps that person has become too enthusiastic in their pursuit of the law or has grown to love the violent parts of their job just a little too much. You want to get rid of them, but telling them to get lost isn't enough. You want to send them a message on how disgusted you are, so you summon them to your office, and after a verbal dressing down, you tell them to turn in their badge. Or you just rip the badge right off of them. (Obviously, if they're Ax-Crazy, you'll want to have a lot of bodyguards standing around while you do this.) Alternatively, your employee's dismissal ritual could be a lot more stylized and formal than this, with him or her forced to stand stoically in front of their peers while you strip them of their rank. That done, they turn slowly and head towards the exit while the soundtrack swells defiantly.

An Insignia Rip-Off Ritual is often played up for as much drama as can be milked from it, but just as often, it's played for comedy. In such cases, half of the dismissed employee's shirt might get accidentally ripped up along with the badge. Or the type of things that are ripped off aren't formal "signs of office" like pins or badges, but silly things like hairpieces or lapel flowers. A clown might lose his big rubber nose, for instance, or an accountant his pocket protector.

However you decide to perform an Insignia Rip-Off Ritual on your employee, don't expect it to be the last you'll see of them. If they don't join the Other Side, they'll almost always return after a 10-Minute Retirement, either to redeem themselves, or to bring you to justice, take over your organization and perform an Insignia Rip-Off Ritual on you. (That's if you're lucky. If you're unlucky, they'll just wreak bloody vengeance upon you.)

An Insignia Rip-Off Ritual might be the starting point for a Humiliation Conga. Expect a Defector from Decadence to perform this if he's particularly fed up with his former group. When done to a military officer by his superiors, expect his sword to be broken.

A formalized version of this, known as Cashiering,

is used by many of the world's militaries when someone is dismissed in extreme disgrace. Back in the day when military officers purchased their ranks from the crown with hard cash, the money is held in trust by the army and essentially served as a genteel form of bail bond to ensure good behavior; officers who retire honorably would receive their money back in full, while those fired in disgrace would forfeit their money to the army cashier. Just to mention, beforehand the insignias and buttons are removed and re-sewn on with light thread, which explains how they can be removed without tearing the entire jacket. If the ritual also contains the destruction of some issue equipment, such as an officer's sword, that equipment will also be deliberately weakened before the ritual so that it can easily destroyed during it.

One of the most common ways this is Played for Laughs is if someone has this done to them when they're fired from a Burger Fool.

May overlap with Unprocessed Resignation if done in front of a superior who can interpret the gesture as a resignation, and the superior decides not to follow through on that intent.

See also Turn in Your Badge. Also see Smash the Symbol (to which this is a subtrope), Allegiance Affirmation, and Shameful Strip (similarly humiliating and which goes much further). Contrast Earned Stripes.