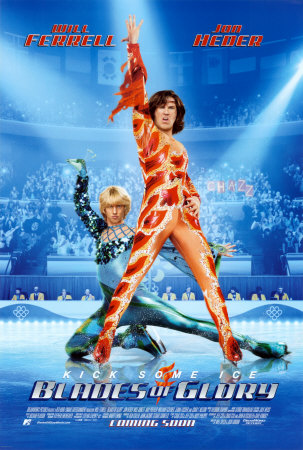 Blades of Glory is a 2007 comedy film starring Will Ferrell and Jon Heder.

In 2003, two champion figure skaters — Charles "Chazz" Michael Michaels and James "Jimmy" MacElroy are banned from Men's Singles skating after a fight on the winner's stand.

The two must overcome mutual dislike, limited time to prepare, their coach's secret past, and the dirty tricks of their main opponents, the Van Waldenberg siblings. The key to victory or defeat may lie in the attraction of Jimmy towards Katie, the Van Waldenbergs' little sister.

Not to be confused with Balls of Fury.

Stranz: It was her idea, she broke his ankle!
Fairchild: Wha--?!
Fairchild: You idiot!
Stranz: I hate you!
Fairchild: (slaps him)
Stranz: (slaps her)
(Beat)
(they kiss; everyone around them groans in disgust)