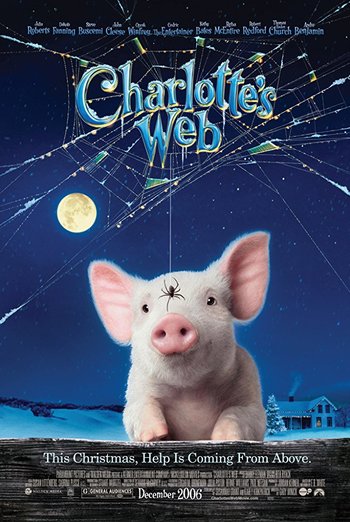 Help is coming from above...
In 2006, a live-action CGI hybrid adaptation of Charlotte's Web was released by Paramount Pictures, Walden Media and Nickelodeon Movies and directed by Gary Winick.
Advertisement:

When Fern Arable (Dakota Fanning) learns that her father, John (Kevin Anderson), plans to kill the runt of a litter of newborn pigs, she successfully begs him to spare the piglet's life. The farmer gives the tiny pig to Fern, who names him Wilbur (voiced by Dominic Scott Kay), and raises him as her pet. To Fern's regret, when Wilbur grows into an adult pig, Fern is forced to take him to the her uncle Homer Zuckerman (Gary Basaraba)'s farm, where he is to be prepared as dinner in due time.

Charlotte (Julia Roberts), a spider, lives in the space above Wilbur's sty in the Zuckermans' barn; she befriends Wilbur and decides to help prevent him from being eaten. With the help of the other barn animals, including a a gluttonous rat named Templeton (Steve Buscemi), she convinces the Zuckerman family that Wilbur is actually quite special, by spelling out descriptions of him in her web: "Some pig", "Terrific", "Radiant" and "Humble". Charlotte gives her full name as "Charlotte A. Cavatica", revealing her as a barn spider, an orb-weaving species (Araneus cavaticus).

The farm family, Wilbur, Charlotte, and Templeton go to a fair, where Wilbur is entered in a contest. While there, Charlotte produces an egg sac. She cannot return home with Wilbur because she is dying. Wilbur tearfully says goodbye to Charlotte but manages to take her egg sac home, where hundreds of offspring emerge. Most of the young spiders soon leave, but three, named Joy, Aranea and Nellie, stay and become Wilbur's friends.

A video game based on this film specifically was released for the PC, GameBoy Advance and Nintendo DS.

Tropes seen in this version include:

Wilbur is the only barn animal to like rain, because with rain comes mud, which he then leaps into and he slips and slides all over the place, vainly trying to get the other animals to join him.

Wilbur is the only barn animal to like rain, because with rain comes mud, which he then leaps into and he slips and slides all over the place, vainly trying to get the other animals to join him.