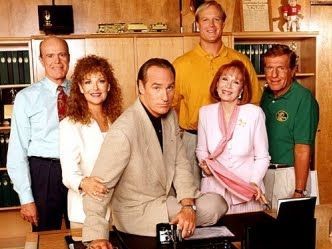 Coach is an American sitcom that ran on ABC from 1989 to 1997. It starred Craig T. Nelson as Hayden Fox, a successful but insensitive college football coach in Minnesota. His assistant coaches include his old friend Luther Van Dam (Jerry Van Dyke) and the much younger "super senior" Dauber Dybinski (Bill Fagerbakke).

A divorced father, Hayden has to juggle his responsibilities as coach with his relationship with his girlfriend Christine Armstrong (Shelley Fabares), a successful anchorwoman, and learning how to be a dad again when his daughter Kelly (Clare Carey) comes to the university for the music and dance program. Kelly also starts dating an artistic and somewhat effeminate young man named Stuart Rosebrock (Kris Kamm), whom Hayden strongly dislikes.

Over the course of the series Hayden progresses from being the inexperienced coach of the hapless Minnesota State Screaming Eagles all the way to becoming the head coach of the Orlando Breakers, an NFL team owned by the wealthy and eccentric Doris Sherman (Katherine Helmond). Meanwhile, Hayden and Christine eventually get married and adopt a baby boy, while Kelly marries (and then divorces) Stuart before graduating and taking a job with an ad agency in New York.

There was an attempt at reviving the show in 2015, but it was canceled due to a troubled production and an unsuccessful pilot. Notably, the new series would have written Christine out as having died due to Shelley Fabares battling autoimmune hepatitis and being unavailable for production.