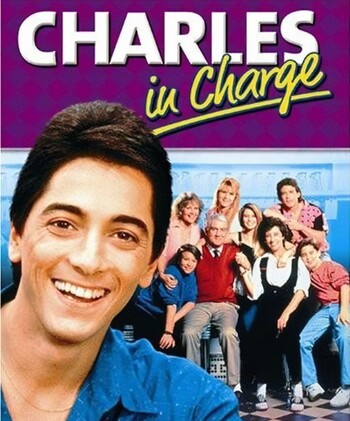 "The new boy in the neighborhood, Lives downstairs and it's understood. He’s there just to take good care of me, like he’s one of the family. [...] And I sing, I want, I want Charles in Charge of me!"
— The show's theme song, written by Michael Jacobs, David Kurtz and Al Burton
Advertisement:

Charles in Charge was a Dom Com that starred Scott Baio as a college-age "nanny" to the children of the families he lived with in New Brunswick, New Jersey. It debuted in 1984 in CBS, with the original premise of Charles being employed by the Pembrokes, headed by working parents Jill and Stan (the parents were played by Julie Cobb and eventual sitcom director James Widdoes) who hired a caretaker to handle their kids due to their work schedules – teenage daughter Lila (April Lerman), smart middle brother Douglas (Jonathan Ward) and youngest child Jason (Michael Pearlman).

Charles held the responsibility of handling his charges' problems, often finding ways to fix them before the episode's end; even still, the children/teenagers he takes care of sometimes are quick to overreact when a plan of Charles to help them goes wrong. When the series originally aired on CBS, the show debuted the same season as another Dom Com about a man employed by a family, Who's the Boss? (although that series featured a male housekeeper instead of a male nanny). In turn, he attempted to balance a normal social life alongside his college courses and role as a live-in caretaker. His best friend was Buddence "Buddy" Lembeck (Willie Aames), a girl-crazy underachiever; Charles' love interest in the series was the fair-haired Gwendolyn Pierce (Jennifer Runyon).

The show was created by Barbara Weisberg and Michael Jacobs, the latter later to co-create My Two Dads, Dinosaurs, and Boy Meets World and its After Show, Girl Meets World. It was produced by Al Burton Productions, the production company of executive producer Al Burton, alongside Scholastic Productions, owned by book publisher Scholastic Corporation, and Universal.

In 1986, a year after CBS cancelled the series following its first season due to insufficient ratings to earn a sophomore season, largely due to being pummeled in the ratings against Highway to Heaven on NBC and The Fall Guy on ABC, Universal revived the series for First-Run Syndication through their own domestic television division, relaunching in 1987.

The show was then retooled for the second season, with only Baio and Aames returning; five new cast members were added: Sandra Kerns as married mother-of-three Ellen Powell, whose husband was serving in the Navy; James T. Callahan as Walter Powell, a gruff but well-meaning war veteran and grandfather of the three Powell kids; Nicole Eggert as Jamie Powell, the popular, boy crazy eldest child; Josie Davis as smart but self-conscious Sarah Powell; and Alexander Polinsky as Adam Powell, the youngest child and only boy of the three Powell offspring. It was during the syndication run that Buddy's personality begins to change, increasingly decreasing in intelligence to the point of being Too Dumb to Live. In later seasons, Ellen Travolta joined the cast as Charles' vivacious, supportive and fairly wise mom, Lillian. The show's primary setting remained in the house inhabited by the Pembrokes, who leased the house to the Powells after the Pembrokes "moved to Seattle" in the season two premiere "Amityville". The show became successful under its new syndicated format, and ran for five additional seasons, ending in 1990.