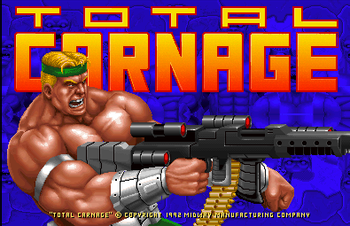 "You suck at this game!"
Advertisement:

The year is 1999, and the evil General Akhboob closes off his country of "Kookistan" to the rest of the world and captures all of the reporters that went to the scene looking for a story. Also, the general is using his base to create mutants, stockpiling weapons and doing other various nasty things, and it's up to the Doomsday Squad (Captain Carnage and Major Mayhem) to go in, destroy the base and capture General Akhboob.