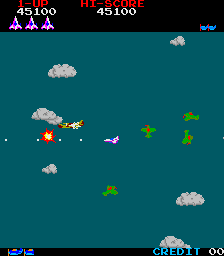 Your aircraft is a sleek jet that travels to five different time eras which each have different enemies. The time periods are as follows:

In the first four eras, the background setting is the sky with clouds; in the fifth, it's space with (equally harmless) asteroids.

During waves with missiles (helicopters and jets), tight turns with many double-back actions will render the attacking missiles mostly useless. Concentrate on shooting down entire squadrons (whose appearance is signaled by a siren sound) to rack up bonus points. You can also rescue the flying parachutists as you battle the enemies.

This game was designed by Yoshiki Okamoto. He was hired by Konami as a graphic artist, although not long after being hired, he was asked to design a driving simulator video game. He did not like the idea of a driving game, but he did like Bosconian a lot, so he decided to base his game on Bosconian without telling his boss. He was also smart enough to know he would get in trouble for doing this, so he also had his design team simultaneously create code for the driving game too, in case his boss wanted to see it. When his boss asked if the driving game was finished, Okamoto showed him Time Pilot instead; his boss was angry, but Okamoto asked him to do a location test, the game was well-received, and the rest is history. Okamoto designed only two games while at Konami: Time Pilot and Gyruss. He later went to Capcom where he designed 1942, Final Fight, and the Street Fighter series of games.

This game had an In Name Only sequel of sorts in 1984 called, not suprisingly, Time Pilot 1984.

Time Pilot has examples of :