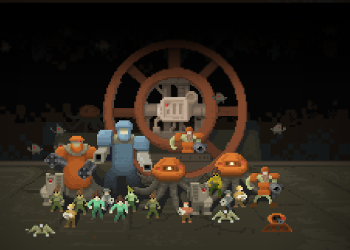 Beware those monsters, mutants, robots and a gone-crazy AI.

In the future, Mega Corporations have transcended governments, and control whole planets for their research. On the planet Medusa 1-C, military development corporation Militech has been conducting experiments in necrotic tissue reactivation and "nonhuman combatants", as well as a side-line in teleportation physics. Needless to say, this goes horribly wrong in all the ways you'd expect, and the player is the sole survivor. In order to escape, you now have to fight your way through 10 (randomly generated) zones of the base, while fighting off the suborned shells of your former colleagues, and the released experiments they were developing.

Teleglitch is a top-down Shoot 'em Up mixed with a Roguelike, and heavily inspired by id Software's "Quake" First Person Shooters. There are also elements of Survival Horror, generally invoked via ammo scarcity and the Item Crafting mechanic, which allows you to create useful "enhanced" items by combining scarce components, all of which are consumed on use. Some items relevant for construction are also essential for survival outside of the mechanic, introducing the tension between hoarding, use of items immediately, and use of items to make better items.