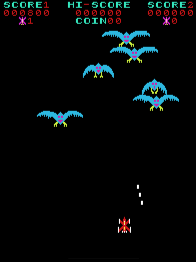 Phoenix is a Galaxian-type Arcade Game and the One-Hit Wonder developed by the Phoenix, AZ-based Amstar Electronics in 1980, released by Centuri in the United States and by Taito in Japan. Unlike the genre's predecessors where enemies were portrayed as alien monsters or other space ships (bar the Final Boss, which was an early example in video games), this game pits you against bird-like creatures, including the titular phoenices who swoop down in complex formations and are capable of firing back. Your spaceship is armed with regular shooting projectiles as well as a defensive shield. Shooting the birds while they flew diagonally offered bonus points and distinctive explosion sprites.

The game is noteworthy for offering enemy variety in 5 stages. Stages 1 and 2 have you battling against a formation of small birds, much like in Galaxian. In stage 1 the birds are yellow; in stage 2 the birds become pink and more aggressive, while your spaceship gains the ability to fire more rapidly. Stages 3 and 4 begin with meandering phoenix eggs which hatch after a few seconds and reveal the great mythical birds. They are larger than the birds in the previous stages and can only be defeated by a direct shot in the center of the body. Hitting them in their wings will tear them apart, but they don't seem to do any damage to the phoenices, who can regenerate shortly after losing both. Sometimes the phoenices revert back into their eggs, after which they respawn. The phoneices are blue in stage 3 and pink in stage 4.

Stage 5 is a Boss Battle, where you must breach the hull of an alien Mother Ship and deliver the final blow to the alien controlling the ship and, presumably, commanding all the birds. The alien has firepower of his own and is backed by the small yellow birds from stage 1. People consider this the earliest example of a Final Boss stage in a video game. After the boss is defeated, the game goes back to stage 1 and can be played indefinitely for a high score.

Phoenix was a standout game when it was released, lauded for its unique enemies, beautiful multi-colored sprites, intense shrieking sound effects and eerie, atmospheric, but sweet music that opens the game. The game has spawned many clones and bootlegs and an official sequel called Pleiads, although made by a different developer. Phoenix was ported to the Atari 2600 in 1982, and was released on the Xbox, PlayStation 2, PSP and the PC as part of Taito Legends in the US and Europe.

Phoenix has examples of: