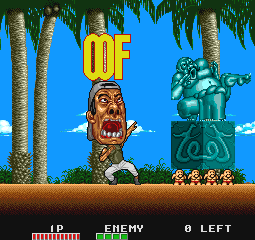 "Hot sauce!"
"WIN WIN"
— The end of each stage
Advertisement:

A 1990 Arcade Game, Trio the Punch: Never Forget Me... is, essentially, madness given video game form. And not merely in the conventional way, no. It is the scrawling on the walls, babbling incoherently while trying desperately to remember where you placed your arms form of insanity. Created by Data East of Bad Dudes fame, this game is also a Beat 'em Up... or something similar, at least.

In fact, the gameplay is not that incomprehensible. Upon starting, you're presented with a choice of three characters: a ninja, a tough guy, and a swordsman. You then have a simple objective: Upon defeating enemies, they will sometimes drop hearts. You must collect a certain amount of these hearts to face the boss, defeat it, and clear the stage. Sounds ordinary enough, right?

Except it turns out that the gameplay is merely an afterthought to everything else, and the stages are usually trivial. Instead, the game focuses entirely on attempting to reduce its player to tears of confusion and anguish. Describing the entirety of what makes this game so utterly mindbreaking would be a several paragraph endeavor, but suffice it to say that with the armies of Karnov, the (almost) inexplicable "WEEBLES FALL DOWN!" stage, copious amounts of Engrish, never-interrupted stage music, battles with pink sheep that curse you, a surprise appearance from Colonel Sanders, and a Gainax Ending that gives Neon Genesis Evangelion itself a run for its money, Trio the Punch: Never Forget Me... succeeds in its title's plea.

In Japan, the game is considered to be one of the progenitors of kuso-ge, or "crappy games", games known for their astoundingly horrible nature. In fact, the game was deliberately designed to be bad (and insane), which also qualifies it as baka-ge, or "stupid game".

or:
KAMAKURA: Thanks for cheering me up
MR. CHIN: Superb
or:
SANTOS: I'm faint from hunger
MR. CHIN: Well done well done

Trio the Punch: Never Forget Me... (A Curse of Sheeps)

Trio the Punch: Never Forget Me... (A Curse of Sheeps)