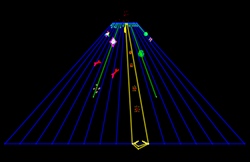 FEED YOUR HEAD
INTO THE WEB
— Game Start dialouge in TxK and Tempest 4000
Advertisement:

You're at the top of a long tube. Lots of colorful things are crawling up the tube at you, and shooting things at you. When you shoot them all, you go whizzing down the tube... to yet another tube.

The game came into creation when programmer Dave Theurer came up with the idea after having a nightmare about monsters crawling out of a hole. It's a Shoot 'em Up, and fun enough that it doesn't need any excuse. "Besides, we're Atari, and this is The Golden Age of Video Games; we know you're going to keep feeding quarters into anything with our logo on it, story or no. Go nuts, guys!" This video game was released in 1981.

Not to be confused with William Shakespeare's The Tempest.