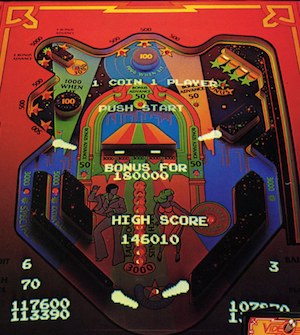 The arcade version of Video Pinball, with superimposed graphics.

Video Pinball is a series of Digital Pinball Tables released by Atari between 1977 and 1980.

The original Video Pinball was an upright arcade cabinet. A mirror reflected video images of the pinball, flippers, and targets over a printed background. Pushing down on the control panel simulated a nudge on screen, and up to four players could play at once.

The second version of Video Pinball was a dedicated home video console. It played four versions of pinball, as well as two versions of Breakout and a paddle-based basketball game. An OEM version of the system was produced for Sears' Tele-Games label, under the name "Pinball Breakaway."

The final version was a game cartridge released in 1980 for the Atari 2600, and was programmed by Bob Smith. It featured simplistic simulations of a pinball machine's plunger, flippers, bumpers, and rollovers. A "nudge" feature allowed players to change the ball's movement with the joystick, but excessive movement would "tilt" the machine. This game is now available on Xbox Live Arcade, as well as Code Mystics' Atari's Greatest Hits collection.

The various versions of Video Pinball provides examples of: