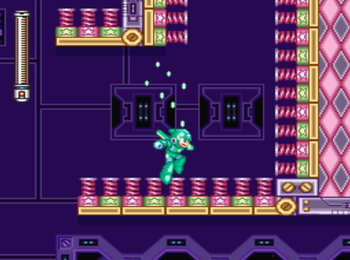 "The trampolines lining this ring are perfect for super-high jumps... But you know what they say—the higher you jump, the harder you fall!"
— Biff regarding Spring Stadium, ARMS
Advertisement:

In many platform games, there is one common object that is rather rare in Real Life (except around swimming pools): springboards. They usually look like plates with springs attached to the bottom, but they can take many forms, sometimes more practical but sometimes much more bizarre.

Things that can sometimes also function as springboards in video games:

Some springboards will launch the player up whenever he lands on them, but sometimes a jump button needs to be pressed on a springboard to jump higher. When the latter is implemented poorly, the Springboard Problem, a form of Fake Difficulty, occurs when it's easy to miss the exact timing and jump much lower, possibly into a Bottomless Pit.

See also Goomba Springboard, Spring Jump. Spring Coil is for when the springs are on a character's person.

Examples of springboards in video games:

Examples of other objects that function as springboards: