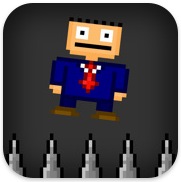 Our hero, ladies and gentlemen!
Advertisement:

Karoshi is a series of puzzle-platformer games by Jesse Venbrux.

The gameplay is simple: Find clever ways to kill yourself. Over the course of the game, you'll have been crushed by a giant swinging hammer, launched a potted plant like a rocket, and flung yourself into a giant, severed version of your head. To do so, you'll not only have to think outside the box, but set the box on fire and jump into the flames.

Yes, it's that kind of game.

There are also five sequels: Karoshi 2.0, a sort of Expansion Pack with additional level editor, improved graphics, and many more absurd situations; Karoshi Factory, which focuses more of puzzle elements than unorthodox solutions, except the levels now require you to kill several characters in each stage; Karoshi: Suicide Salaryman, a sequel in the form of a flash game; Super Karoshi, another flash game where the main character gains the ability to turn into SUPER KAROSHI, who can't die but has to kill other businessmen. And then die. Finally, Mr. Karoshi for iPhone, iPad, Android and PSP which goes back to a more basic, classic gameplay but also introduces two additional characters, a chief and a Ms. Karoshi that can also be controlled in some levels.

The full series is available here