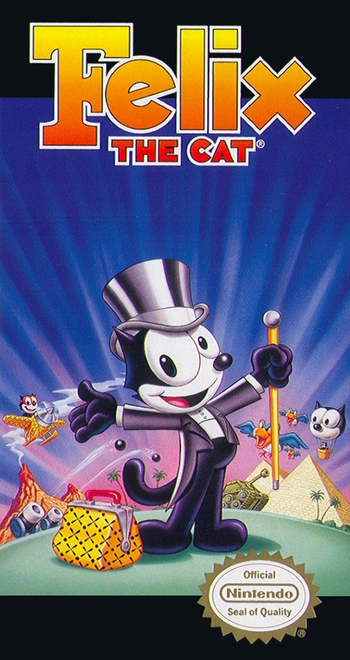 The evil Professor has kidnapped Kitty Cat and taken her far, far away! He wants the incredible Magic Bag of Tricks from Felix. If Felix can't rescue his girlfriend, who knows what the Professor will do?
Luckily, Felix still has the Magic Bag. You must use the awesome powers of the Magic Bag to their fullest if you want to rescue Kitty.
—The manual, summing up the game's entire story.
Advertisement:

Felix the Cat is a 1992 video game based on the classic cartoon series Felix the Cat (specifically, the Joe Oriolo incarnation of the series), developed by Hudson Soft and released for the NES and Game Boy.

The gameplay is a typical sidescrolling platformer in the vein of Super Mario Bros.. Felix has to travel through nine different worlds, fighting hordes of enemies and several bosses with the help of his Magic Bag of Tricks, all to rescue his girlfriend Kitty Kat from his archenemy, The Professor. Gameplay wise, Felix has a power-up system that he can stack to help him out—he starts off with a boxing glove in his Magic Bag of Tricks, but he can upgrade his attacks into a Magic Wand, a Car, and a Tank, with the only handicap being a time limit on each power up (which can be replenished by finding milk bottles) and losing a power-up with each hit.

The Game Boy version, which was released in 1993, is almost identical to the NES version gameplay wise, but it has fewer levels, simplified level layouts, and obviously inferior graphics and sound due to the lack of color, smaller screen and inferior hardware. An unauthorized Sega Genesis port of the NES version was developed in Russia.

Not to be confused with Fix-It Felix Jr., nor with Dragon Co's unlicensed 1998 NES Game Felix the Cat by Dragon Co..