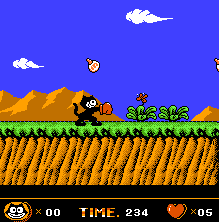 The story is loosely based on the 1936 Felix cartoon The Goose That Laid the Golden Egg—Captain Kidd, an old foe of Felix, has kidnapped Goldie the Goose again, and Felix has to go off and rescue her.

The gameplay is a side-scrolling platformer and has some thematic similarities to Hudson Soft's 1992 NES game, but there are several differences. First, there are only two boss fights, the power-up system acts different, and there's an all around lack of polish to the controls, design and presentation.

Dragon Co. also reused this games engine for another one of their NES bootleg games, Super Hero, for the Dreamgame 75-in-1,