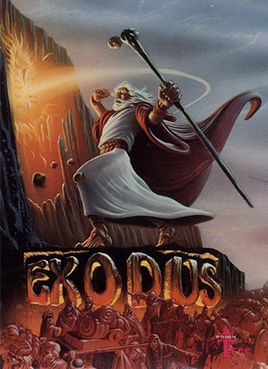 The actual name of this game is Exodus. It has been given a different title on this page for disambiguation from other works of the same title.
Advertisement:

Exodus is a Christian video game developed and published by Wisdom Tree and released for the Nintendo Entertainment System in 1991.

In the game, the player plays as Moses who is on the way to the Promised Land to free the Israelis. Every level of the game is (fittingly) a labyrinth where Moses must go through and acquire five question marks as well as a certain amount of manna. After Moses finishes a level, he must correctly answer five Bible questions moving on to the next level. Moses has the ability to shoot glowing W's (representing the Word of God) as an attack.

In 1992 Wisdom tree released a Mission-Pack Sequel named Joshua & the Battle of Jericho. In this game, the player plays Joshua who must infiltrate and pillage the city of Jericho. In that game, Joshua attacks enemies with a shofar.

Tropes featured across both games: