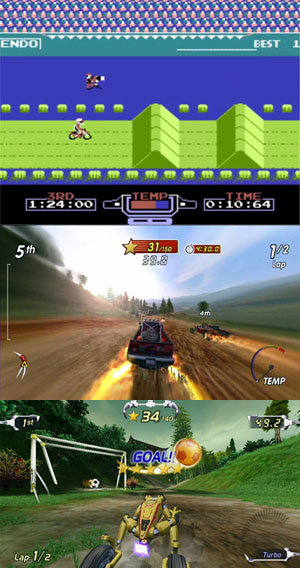 Bikes, Trucks, and Bots - EXCITE!
"In the 1980s, few things were extreme. Maybe traffic in Los Angeles and jalapeno peppers, but that was it. Now that everything and its tattooed dog are Xtreme, Nintendo has rereleased the granddaddy of high-flying, knee-scraping, body-tumbling racing games: Excitebike."
Official Nintendo website on the GBA port of Excitebike
Advertisement:

The Excite series is a line of action-focused, dirt-track racing games from Nintendo. Each installment tends to be distinct from the rest in terms of presentation and gameplay, ranging from somewhat realistic to downright insane, and even sometimes trading the traditional bikes for trucks or even transforming mechas.

Despite this, there are common elements found in all of them. Tracks tend to feature obstacles to avoid as well as ramps to jump off of; while in the air, racers can control their vehicle and even perform aerial tricks, and sticking the landing is imperative in order not to crash. Vehicles also always feature a turbo mechanic, which provides a noticeable boost to their speed and jumps, but will cause the engine to overheat if used too often.

The series is comprised of the following games:

The WarioWare series features various mini-games based on the original NES game, along with an unlockable "Wario Bike" game in Twisted which mixes the gameplay of Excitebike with that of Super Mario Bros.. The Excitebike racers made a minor appearance as an Assist Trophy in Super Smash Bros. Brawl, in their original 8-bit form. Excitebike is one of the game represented in NES Remix; as promotion for the latter, an Event Course inspired by Excitebike was added to Super Mario Maker, which unlocks the biker as a costume upon completion. A circuit based on Excitebike was featured as DLC for Mario Kart 8, with the position of ramps and obstacles on the track changing between each race.