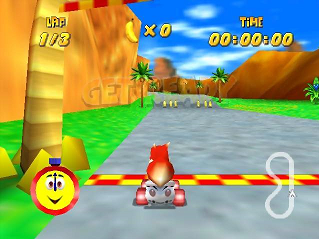 We hope that squirrel is sober.
Advertisement:

When you've dug deep down into a Racing Game or something similar, you feel so almighty and professional that you just want a way to prove it, and what's a better way than to do a race as quickly as possible; though there is the problem that all those extra cars might prove to hinder that time a bit, and those power-ups won't help at all, so for your convenience, there is Time Trial, or alternatively, Time Attack.

This is a mode where most dangers and anything that may unfairly interact with your run are gone, giving you all the space to just wing it at your own accord, be it heading for the world record Lap, or Time of a full course (it's also a great way to get to know the course if you're playing for the first time).

Also for your convenience, there will be a Racing Ghost, see-through recordings of racers who have set quick times, further giving you the enthusiasm to beat them, or just to see how they did it, if you can keep up. Most racing games also have staff ghosts/records set by the developers themselves and are usually very tough to conquer, but watching how they race a track may give the player some new insight on how to tackle them.

These days, getting a good time in time trial mode is worth that much more, and games usually just record it in laps, making mastering that run easier on the player, and since comparison of records is done on the fly online, you can bask in the glory so much more. See also Speed Run, which is this idea applied to the entire game.