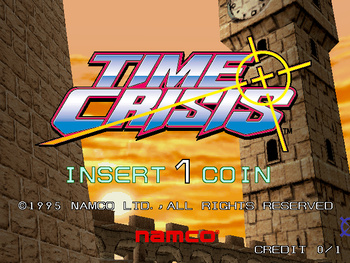 Sometime, somewhere, someone is plotting a government overthrow...
— WAIT —

Admit it: whenever you play those Light Gun Games, the absurd amount of enemies that constantly chip away your health/life makes you believe The Computer Is a Cheating Bastard. How are you ever supposed to stop this onslaught? Enter Time Crisis by Bandai Namco, a series of Light Gun Games for the arcades, now in its fifth iteration. Its main distinguishing feature is its use of a foot pedal: the player holds the pedal down to attack; when the pedal is released, the player hides behind a nearby wall/tree/bench/other object and is safe from attack, but can't retaliate. This means that unlike most light gun games, any attack can be dodged without harm even once it's been launched, although the reaction time you have can be punishingly low.

Each game follows a different set of characters as they gun their way through unrelated international crises. The only two constants are the "VSSE" (Vital Situation Swift Execution), a Heroes "R" Us organization, and "Wild Dog", a freelance mercenary who serves as each villain's Dragon, despite blowing himself up in increasingly impressive pyrotechnics each time.

As one might expect, time is an important part of the series. A timer is constantly running down to zero, being replenished each time players clear a "room" of enemies. In the first game, the timer was the main challenge: it had strict limits, and all lives are lost if time ran out. Later games toned it down considerably: only one life is taken, and the limits are much easier to deal with. In fact, they mostly just prevent excessive turtling and make sure the player eventually dies even if they never press the pedal.

The primary installments in the Time Crisis series are:

The following are considered Spin Offs to the series:

Additionally, the console ports of the original, 3, 4note  Only the version bundled with the GunCon3, Crisis Zone and Razing Storm have exclusive scenarios not found in the arcade versions. These usually follow events from the perspective of one of the Non Player Characters and expand on the arcade mode's story.

A Character Sheet is currently in the works. Please contribute.

open/close all folders
General
Time Crisis
Project Titan
Time Crisis II
Time Crisis 3
Time Crisis 4
Lampshaded in the next chapter of the full story when Rush reports to the situation room, and he can't be more pissed than this.

Captain Rush: Sir, what is going on?! The enemy aren't terrorists! They're soldiers from our military!
Lt. Gen. Garfield: Yes...You're correct. They're a unit from the U.S. military.