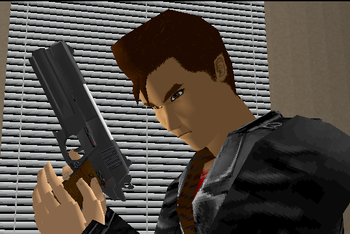 Richard Miller is the player character of the first Time Crisis. Unlike the other VSSE agents, he works alone on his missions. He also doesn't speak in the games. 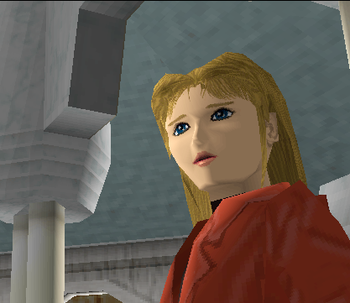 Rachel is the daughter of the President of Sercia. She was kidnapped by Wild Dog and Sherudo Garo and Miller's mission is to infiltrate Sherudo's castle and rescue Rachel. 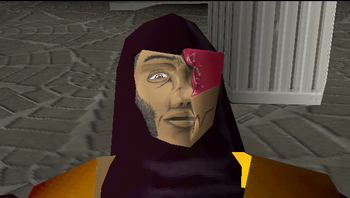 The first boss of the game, who is fought in Stage 1. A Ninja assassin working for Wild Dog and Sherudo. Unlike most other bosses, he's not killed when defeated; in fact, he reappears to fight against you twice in Stage 3, although he's much easier to defeat then.

"Since you have traveled so very far, be my guest and let me ENTERTAIN YOU!" 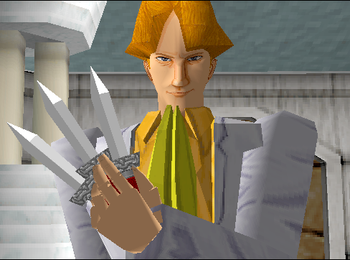 Sherudo is the main antagonist of the first game. He was an exiled dictator and the last blood relative of the Garo family, the former royal family of Sercia. 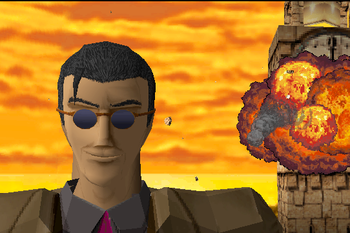 Let's end this once and for all, just To Be Sure!
"A bunch of annoying little flies..."

Wild Dog is a terrorist-for-hire who leads multiple criminal syndicates around the world, and a recurring antagonist in the series. In each installment, he serves as The Dragon to whichever current Big Bad the game has. He is also the penultimate boss fought sometime during the third and final stage of each game, with the exception of the first and fifth, the latter where he's the boss at the end of each stage. 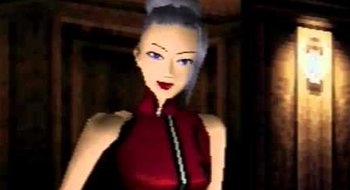 "Dance, baby, dance! Dance to the death!"
"Leave me alone! It's men like you that are ruining this world!"

Kantaris is a female arms dealer who first appeared in the console exclusive Special Mission of the original Time Crisis as its main antagonist. She was also a minor character in the spinoff Project Titan. She's known to supply arms to Wild Dog; he's one of her favorite customers, in fact.

A guard working for the Kantaris Organization. Boss of the Ballroom section in the Special Mission.

The first player character in the second game.

The second player character in the second game. He comes back in 5 as a supporting character.

A female VSSE agent who is kidnapped by NeoDyne Industries.

Works for Ernesto Diaz in NeoDyne Industries as a correction officer. Serves as Stage 1's boss.

"This is not a real satellite, anyway, let me ENTERTAIN YOU!"

The leader of NeoDyne Industries and the main antagonist of the second game. He planned on launching a Kill Sat in order to Take Over the World.

The first player character of the third game.

The second player character of the third game.

A female member of the Lukano Liberation Army. Her brother was one of the members kidnapped by the Zagorias Federation, and aided the VSSE to not only liberate Astigos Island from Zagorias' control, but to rescue her brother as well.

An Air Force Colonel of the Zagorian military. Serves as Stage 1's boss.

Leader of Georgio Zott's Assassin Squad, who ambushes the agents and Alicia on their way to the Zagorian base. Serves as Stage 2's boss.

"Allow me to introduce myself... My name is Wild Fang, and it's a pleasure to meet YOU!"

Wild Fang is the younger counterpart to Wild Dog. His primary attacks include kicks.

Giorgio Zott is the leader of the Zagorias Federation and the primary antagonist of the third game.

"Ha! With the money I'll make with this, I can go wherever I want!"

A former member of the Lukano Liberation Army, he has betrayed them and joined the Zagorias Federation for the love of money.

The first player character of the fourth game.

The second player character of the fourth game.

"You! You're a disgrace to your country!"

Captain Rush is a soldier for the U.S. Army who has been sent to investigate the Terror Bites being smuggled by terrorists.

"Hi, I'm Elizabeth Conway. I'll be assisting you from the Air Surveillance Center."

Lieutenant Conway serves as a dispatcher for Giorgio, Evan, and Rush during the events of the fourth game, providing support from the skies.

"You want it? Then come over here and take it!"

A Captain of the United States Army, and an arms dealer who attempted to sell Terror Bites to W.O.L.F. Serves as Stage 1's boss. Wears a pull-up mask covering his mouth, which somehow disappears when he is defeated.

"What good is patriotism?"

A First Lieutenant of the Hamlin Battalion, and the supervisor of its Biological Weapons Research regiment. Serves as Stage 2's boss.

"Well, if you're gonna stop me, you've gotta catch me first!"

A relative of Jack Mathers and another officer in the Hamlin Battalion. Only encounterable in William Rush's story mode.

Barrows is the leader of the Hamlin Battalion and the primary antagonist of the fourth game. He's the creator of the Terror Bites.

One of the newest VSSE agents and the Player 1 character.

One of the newest VSSE agents and the Player 2 character.

She serves as a dispatcher for Robert Baxter, Luke O'Neil, and Marc Godart during the events of the fifth game.

MAJOR UNMARKED SPOILERS for Time Crisis 5: True Mastermind Edition
Notably, Time Crisis 5 does not introduce any new major villainous characters; all of them have appeared in previous games. Perhaps the biggest twist is that two major antagonists are the protagonists of Time Crisis II.

All spoilers in this folder are unmarked, as stated in the folder title. You have been warned.

"How about that! Wild Dog is good for something after all."

Keith was last seen in Time Crisis II as one of two VSSE agents sent to neutralize Ernesto Diaz and NeoDyne Industries' nuclear satellite plan. By Time Crisis 5, he appears to have become a VSSE traitor.

"If you had just died, this would have all gone according to plan."

Formerly a VSSE frontline agent, he returns in 5 as a supporting sidekick, leading the search for the VSSE traitor and infamous VSSE archnemesis Wild Dog.

...or so he says, until it's revealed that he is the traitor. He had stolen a drug during a mission years ago, stated to "negate pain and fear", i.e. turn humans into zombies in all but name, and intends to weaponize it in the form of missiles that detonate to spread the drug.

The main protagonist of Crisis Zone and the leader of Special Tactical Force.

Mellisa is the daughter of the Commander Kessler. She was kidnapped by the URDA in the Grassmarket District storyline.

"I have been waiting for you, my STF friends. The atomic reactor is on overdrive. Soon London will be nothing more than a memory, and then my wrath shall spread! It won't matter for you...you'll instantly die here anyway!"

The original URDA leader in the Garland Square storyline. He attempts to destroy London by operating the nuclear reactor known as Geyser 1.

"I didn't think you could make it this far. But your luck has run out. I'm gonna settle this once and for all!"

The new leader of URDA in Grassmarket District storyline.

Codenamed "Abacus", she is a female VSSE agent who was kidnapped by Kantaris during the events of the game.

"Let's see how you save your spy girlfriend..."

One of Kantaris' loyal bodyguards. He is currently holding Marisa Soleil captive after Kantaris ordered him to do so as a result of Kantaris intercepting Soleil's e-mails. Aboard Kantaris' yacht,he was guarding Marisa's cell when he was shot by Richard in a shootout.

"So you finally found me... mwahahahahaha!"

A Caruban anti-government soldier who was responsible for assassinating the Caruban president Xavier Serrano and for framing Miller in the act. 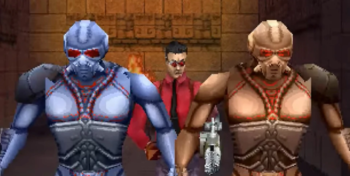 Richard eventually unveils the truth behind Wild Dog's Project Titan operation, that the project is for Wild Dog to create his own titanium-based robot army... the first two prototypes, Deimos and Phobos, which he then sics on Richard.

The president of Caruba who was assassinated by Ricardo Blanco. It turns out that it was a body double that was killed, and the real president was held hostage by Wild Dog, whom he released later offscreen.