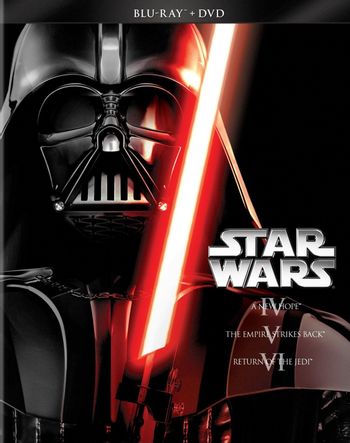 Many series have their own Mascot, (Series Mascots, In Universe mascots or otherwise). Sometimes that mascot is one of the ones responsible for all the bad things happening (or at best is a neutral force that still causes things to go wrong for the heroes more often than not.) Though it's not necessary, the mascot can still fall into the Ridiculously Cute Critter or Sidekick Creature Nuisance tropes just to make things extra twisted. Whether they are Big Bads, Dragons, Ineffectual Sympathetic Villains or just the humble Mascot Mook is not needed, what distinguishes this from the other tropes is that the Series Mascot is evil.

The difference is that most cases are usually either the most iconic character of the franchise, or checks off the items in a Weasel Mascot checklist, but their cuddly appearance belies a sinister nature.

As a general rule, this is extremely common with horror. Even if it doesn't simply become a Villain-Based Franchise, a horror movie franchise will usually see its villain/monster turn into its most recognizable character.

Related to Mascot Mook, when the mascot is one of the more common enemies in the game.

Due to the nature of Face–Heel Turn, Evil All Along, and the Series Mascot, there will be some spoilers. See also Antagonist Title and Villain-Based Franchise. Sometimes comes about due to fans Rooting for the Empire.