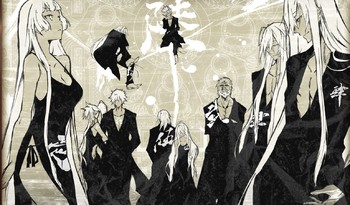 Gather round and listen, to the stories of the Gods seated atop of the world.
"I think, therefore I am. To shout with all your heart and soul that "This is me, this is how I am". Find your own way of life, believe in it and risk your very being to carry it through. That's what it means to be human. That's how the world turns. Each and every person carries with them a color that collectively depicts this kaleidoscope that we know as 'all of creation'."
Advertisement:

Shinza Banshonote 神座万象 The title is a bit of wordplay with the words for "All of creation" (森羅万象 Shinrabanshou) and "throne of God" (神座 Shinza) leading to the title roughly translating as "The Divine Throne of Creation". is a series of visual novels written by Takashi Masada that tells the many tales of the gods who change the way of the world by imposing their laws on it via the Throne, a hyper-dimensional artifact that allows one to control reality.

Originally starting with the somewhat experimental novel Paradise Lost in 2004, the series has since grown as each new installment added more to the world at large. While each story is self-contained, they all tie together in a multiversal canon where large scale Reality Warping is a common occurrence and where strong enough individuals can impose new natural laws in accordance with their own desires.

The series is also known for its rather verbose writing and over the top scale. This has had the somewhat unfortunate side-effect of making the novels infamously difficult to translate properly, making good translations hard to come by. However, with the official English release of Dies Irae, that now seems to be changing. Unfortunately, Greenwood, the parent company of Light, closed its doors at the end of March 2019 leaving both the series itself and any future English localizations up in the air.