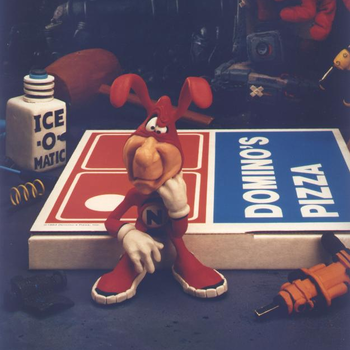 The Noid is a series of advertisements for Domino's Pizza, animated by Will Vinton. The ads involve him ruining delivered pizzas through various means, only to get foiled by Domino's, which touted its quality assurance and its 30-minute guaranteenote that assurance got Domino's into legal trouble by the early 90's when delivery drivers got into accidents or otherwise broke traffic laws, leading to "30 minutes or it's free" being changed to "30 minutes or $3 off", before being phased out altogether. The ad campaign was especially well known that not only has the Noid himself was featured in video game tie-ins (Avoid the Noid and Yo! Noid), but he was brought back for a new commercial in April 2021 after three decades of dormancy, also being featured as a promotional boss in the mobile game Crash: On the Run!.

We keep the Noid out and all the tropes in: