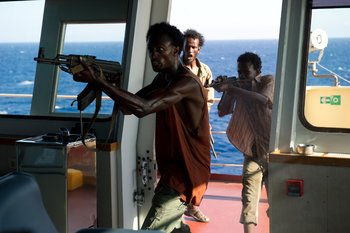 ♫ "They're the pirates who'll hijack anything!" ♫
"Those guys were pirates? Admit it, you chased much cooler pirates when you were on our team."
— Hank Venture, The Venture Bros.
Advertisement:

Truth in Television: Pirates still roam the waters today (mostly in regions of high political instability or weak military resolve to stop them, such as Somalia, West Africa, and Southeast Asia). This trope is about them.

Unlike their conventional counterparts, there is nothing romantic about these modern-day pirates. They tend to be completely ruthless, cold-blooded killers, devoid of honor and willing to stoop to any crime: sociopaths on the high seas. Bonus points if characters express disappointment at these pirates' failure to shiver timbers. Yet, this characterization of being honorless, psychopathic killers is exactly how pirates were viewed during the Golden Age of Piracy. Many of them lived up (or down) to this reputation. Caveat Many golden-age pirates were defectors from British naval press-gangs, making them essentially escaped slaves and thus occasionally sympathetic in colonial and even British literature. Black escaped slaves sometimes became pirates as well, often because they had no real place to go after getting free. A number of the pirate crews were heavily black as a result. Perhaps another four hundred years from now, Somalian and Southeast Asian pirates will be viewed as romantic rogues.

Malaysian and Indonesian pirates live up to their reputation in creative ways that would make British pirates of yore proud. Instead of walking the plank, for instance, they like to leave crewmembers stranded in shallow water coral reefs 50 miles off the coast, where they have to stand on tip-toes waiting for a passing ship. This is to ensure you don't call for help while the ship is still in the vicinity — and that is if they don't execute everyone on board. The Somalis, on the other hand, make millions on ransom alone. In fact, ransom is the main point for them; collecting a ransom is quicker, easier, and usually safer than stealing property of similar value and holding onto it long enough to find a buyer.

You won't find modern pirates sailing the seven seas in visually impressive warships. That's because the entire venture cannot work without at least some decent degree of stealth from worldwide law enforcement. The use of vessels analogous to Blackbeard's Queen Anne's Revenge or Bartholomew "Black Bart" Roberts' Royal Fortune would be easily visible by satellite imagery, and even if a modern pirate could take control of a hyper-fast-and-powerful ship on the level of a US Navy destroyer, most every nation in the world would almost certainly launch immediate near-limitless-resource missions to hunt down and destroy it. What's more, operating a modern warship requires resources far beyond what it took to run an effective pirate ship in the 18th century. In other words, piracy, like any other form of criminal enterprise, was forced to adapt to the times, or die.

Perhaps the closest thing they have to a Cool Ship are a few tankers and cargo ships which are larger than anything that their earlier counterparts could ever get their hands on, mostly used as mother ships.

Ruthless Modern Pirates may also be Submarine Pirates. See also Sky Pirates and Space Pirates for specific types of modern-day/future pirates that may still retain their romanticism. For modern day pirates who still dress and act as in the Golden Age of Piracy, see A Pirate 400 Years Too Late.

The naval counterpart of Ruthless Foreign Gangsters. Not related to Digital Piracy Is Evil.

Alternative Title(s): A Disgrace To Blackbeard