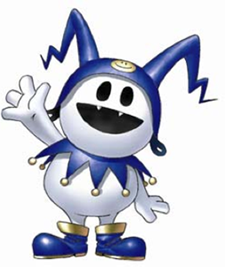 Jack Frost, loveable mascot, hee ho.
"We get off on your tears."

Atlus is a Japanese video game developer, publisher and distributor based in Tokyo and a subsidiary of Sega, founded on April 7, 1986. While not necessarily having the name-recognition of some larger companies, they have a huge number of quality products, both as a developer and a publisher, and often both at once. The Japanese HQ portion of the company is both a publisher (since 1989) and developer, the North American branch serves as a publisher and localization company that publishes more games than just what its parent company Index Corporation develops and publishes; in the list of games below said games are listed with Atlus being the North American publisher.

Many of their internally developed 21st-century games are really freaking HARD.note Games published by Atlus USA but not developed by its parent company may not have this trait Though good design means they usually avoid Fake Difficulty. Their American branch is also famous for the translation of their games: Woolseyism and Superlative Dubbing abound in games they publish. Atlus is also famous for first exposing North America to Nippon Ichi Software, having published Rhapsody: A Musical Adventure back in the PlayStation 1 era, and later Disgaea: Hour of Darkness game for PlayStation 2. This led to NIS eventually branching out on their own, and to this day the companies share many staff amongst their translation and dubbing teams, as well as an amicable business relationship. In fact, NIS America is responsible for publishing Persona -trinity soul-, the anime based on the Atlus game.

Currently holds the dubious title of "That One Company", due to their joy at making gamers suffer. And we like it, dammit. Funnily enough, even some games they merely published and not developed can be Nintendo Hard, like Demon's Souls and the Disgaea games.

Also note the number of Widget Series below.

Atlus Japan is co-creator (with Sega) of "Print Club".

In June 2013, Atlus' parent company Index Corporation was convicted of corporate fraud, leading to them declaring bankruptcy. Sega eventually stepped in and purchased Atlus for 14 billion yen (approximately $141 million US).

Quite a few Atlus alumni became major players in the game industry after their tenures at the company ended. Kazuya Niinō, Kouji Okada and Range Murata began their gaming careers at the studio.

Its North American rival, Sierra, was known for developing very difficult games and was defunct for years before being revived by its parent company, Activision.

Some of their titles (including externally developed games localized by Atlus USA) include: