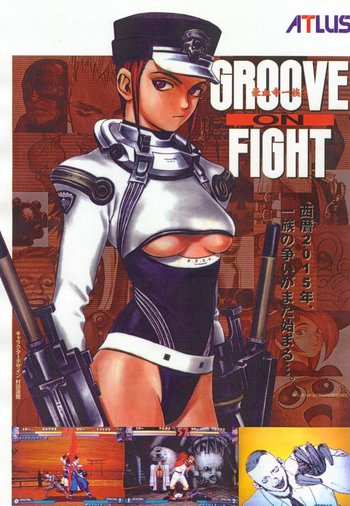 Gōketsuji Ichizoku 3: Groove on Fight, known simply as Groove on Fight, is a Fighting Game developed by Atlus and is known as the Distant Finale of the Power Instinct series, made in a different way than the parent games, being Darker and Edgier, similar to that of Darkstalkers, but still maintains some of the same humor that is particular to the series. Also the game is full of Original Generation characters, with the Goketsuji sisters as the only returning character, as well some of the children of the characters from the previous titles.

The story of this sequel of the Power Instinct series takes place 20 years after the last Goketsuji tournament. Because the lack of family members, Oume and Otane makes an open tournament for the first time in the series in searching for a successor in the family. The graphic style of Groove on Fight is very different from its predecessors, as the sprites are smaller, but are more fluid and have an animated look to them much like several other 2D fighting games.

The game was released on Arcades in April 1997 and only received a home release on the Sega Saturn. Neither it or its console port received a release outside of Japan, but however we could play it thanks to some distribution on Arcades outside Japan, as well by Emulation. It was the last game in the series that was fully developed by Atlus.

For more info about this game, you can see more info in this article

on the Power Instinct Wiki, as well this one

on Sega Retro Wiki. For tropes of the characters, see the Groove on Fight section in Power Instinct Character page.