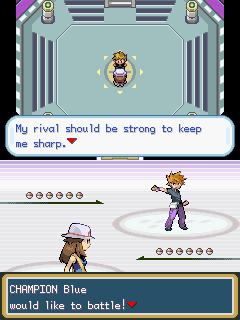 Dante: Look at you. Making a big, dramatic entrance and stealing my spotlight.
Vergil: Well… you don't possibly believe that he deserves to be our main event, now do you?
— Devil May Cry 3: Dante's Awakening
Advertisement:

It's finally over. The Big Bad is defeated, and for good measure, any Greater-Scope Villain is vanquished. Now for the heroes to Earn Your Happy Ending and...

What's this? The Rival now declares himself the final obstacle that the hero has to overcome? Welcome to this trope, where the Rival becomes the final enemy for the hero to fight. Just a rule of thumb, just because the Rival is the final boss doesn't necessarily make him the Big Bad. If the rivarly isn't just a game between them (or if the game is Serious Business) and it's of the duel to the death variety, it may also reveal that the Rival Turned Evil, provided his true colors weren't already known from before.

Sub-Trope of Post-Final Boss, in that this battle is usually less climactic than the (previous) final boss battle, but still potentially hectic. Often overlaps with the Duel Boss. Compare It's Personal with the Dragon, where the The Dragon is the most bitter enemy of the hero, not the Big Bad. Also compare Dragon Their Feet.

Because this is an Ending Trope, could be unmarked spoilers ahoy. You Have Been Warned.