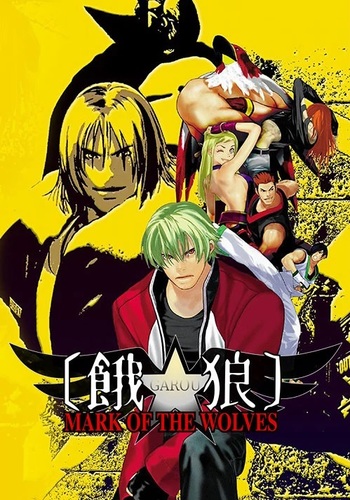 Legends don't die. They get better!
Certainly, they existed...
Those blinded by ambition.
Those consumed with vengeance.
But here, they do not exist.
Only winners and losers here.
For here, THE MIGHTY RULE!
Advertisement:

Garou: Mark of the Wolves is currently the final installment of the Fatal Fury series. It's been a decade since Geese Howard's death at the end of Real Bout Fatal Fury, and the once Wretched Hive of Southtown is thriving without his influence. But just down the coast at Second Southtown, however, some things never change. Without someone running the show, the criminal underworld is scrambling to take over what Geese left behind. In the meantime, Southtown's heroes of yesteryear have moved on; most have retired, but others are training a whole new generation of fighters. Despite being a Living Legend, Terry Bogard has spent the last ten years raising Rock Howard - Geese's son - as his own protégé. Rock is now old and strong enough to forge his own path, but he's still haunted by his lineage... And mystery of what happened to his mother. With the start of the brand-new King of Fighters: Maximum Mayhem tournament, it seems like old wounds won't heal just yet.

Originally released in 1999, Garou was a drastic departure from the previous Fatal Fury games. Aside from Terry Bogard, the entire cast was replaced by newcomers, many of which were children and/or students of their predecessors. The two-plane dodging system and stage hazards were removed entirely. The combo mechanics were brought more in line with the ABCD layout of The King of Fighters, and the brand-new T.O.P. System allowed characters to perform specific attacks depending on how much health meter they had. Most importantly, this game introduces the Just Defense System, which lets players parry oncoming attacks if they block with precise timing.

Many fans have long considered it to be the pinnacle of SNK's fighting game library. Until the last few years, however, Garou was widely regarded as a Cult Classic due to its release being limited to the arcades, Neo Geo, Sega Dreamcast and PlayStation 2, with only the Dreamcast port released in North America in 2001. This all changed in 2016, when it was announced the game would be ported to the PlayStation 4 and Playstation Vita. Since then, this has been expanded to Windows (via Steam and GOG.com), Nintendo Switch, Xbox One and the Neo Geo Mini. On January 22, 2020, it was announced that the GOG, Steam, Playstation 4 and Vita versions would receive an updated rollback netcode. As a result, Garou is making quite a comeback.