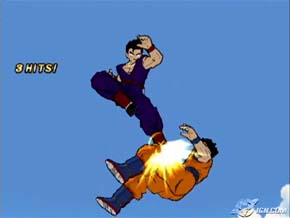 Kicking your own ass at an altitude of OVER 9000 feet! Nice kick, me!
Advertisement:

You know you're in trouble when you're fighting an opponent that can hit you hard enough to send you flying into the sky. Some characters won't stop there; next the hero (or villain) in question immediately flies above you in time to intercept you like the human pinball you have become, then strikes you with such force that you are sent flying toward the ground hundreds of feet below, and crashing into the earth like a meteorite.

There are three ways this can be done:

A Flash Step Spike is to simply fly/jump/Flash Step up and spike the airborne opponent.

A Flying Takedown is to catch the foe in mid air and then crash both him and the attacker into the ground below. This has the advantage of being more powerful, but only if you're completely Made of Iron. Spinning Piledriver is a subtrope.

A Multihit Meteor is a brutal extension of the Flash Step Spike (and sometimes Flying Takedown) where the attacker, rather than letting his opponent hit the ground, flies once more after him and strikes him as he falls.

Because this attack (especially Flying Takedown) implies that the attacker is far stronger than the attacked, it's usually a villain that does the attacking. When it's the hero attacking, it's usually a Curb-Stomp Battle. While you're at it, bring out the Wrestler in All of Us by including a powerbomb, Spinning Piledriver or the like. Not to be confused with dropping an actual meteor on an opponent.