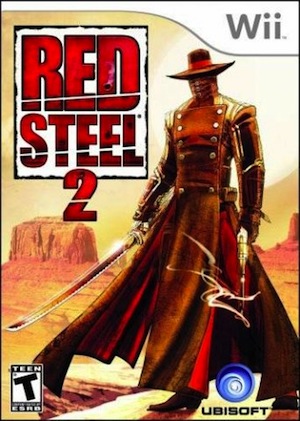 Red Steel 2 is a sequel In Name Only to Ubisoft's first-person shooter/swordfighting launch game for the Nintendo Wii. It follows a nameless almost silent hero, who returns to his home town after having been banished by his clan only to find it completely overrun by a violent bike gang called The Jackals who attack him and take his sora katana. The hero has to work together with the only locals still fighting back, uncover the reason for the invasion and avenge his clan.

This game has completely abandoned the modern yakuza setting of the first game and moved to a Cattle Punk setting, with a new hero, a new art style, and improved controls.