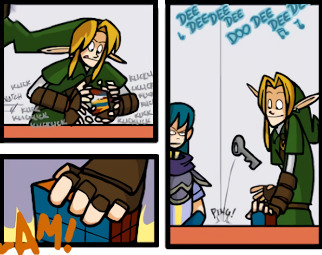 Video games often reward the player with seemingly arbitrary prizes for various in-game actions, with no explanation as to who gives out the prizes or why. Given that there are no NPCs queuing for the chance to earn the same reward, these apparently can only earned by the player character. These rewards seldom have any justification other than encouraging the player to explore the gameworld and play with the toys provided therein.