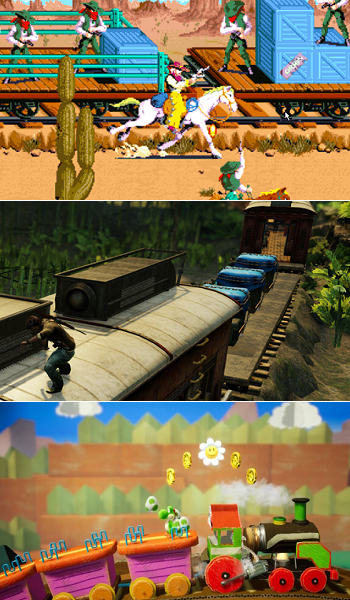 ...and the train, it won't stop going, no way to slow down Top to bottom  Sunset Riders, Uncharted 2: Among Thieves, Yoshi's Crafted World
Gordon: New Yorkers talk like they're all big and bad, but I bet they don't deal with half this shit on the subway!
[soldiers continue shooting at him, he returns fire]
Gordon: The next time I hear someone complain about their commute again, I think I'm just going to punch them in the face.
— Gordon Freeman, Freeman's Mind
Advertisement:

It's very common for our protagonists to find their way onto a train. After all, it's a prime location for adventure. You're stuck in a confined space, and you're unable to leave once the train is moving. You may have to show your ticket or passport, you may be held up by a bunch of robbers, you never know who you're going to meet, and nobody is ever completely sure if that strange-looking toilet door is correctly shut.

After you've run around on the train for long enough, the only way left to go is up, often leading to a Traintop Battle. Other potential goals/dangers include low-hanging signals and tunnels, coupling or decoupling cars, encounters with other vehicles (other trains, aircraft, Humongous Mecha, etc.) moving behind or alongside/above the train to drop off enemies or attack the player (or the train itself), or a time limit before the train reaches its destination (stopping optional).

The music for such stages will often have a galloping or chugging rhythm.

Not to be confused with Rail Shooter. Thriller on the Express is the non videogame version of this trope. See also Levels Take Flight when the locomotive is an airship.