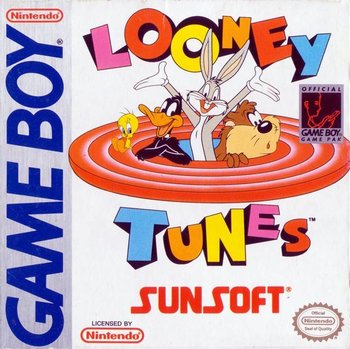 The simply titled Looney Tunes is a 1992 Platform Game by Sunsoft. Based on the popular cartoon series of the same name.

The layout is pretty simple. Each of the stages in the game represents a "cartoon" where you play as one of the characters, as they try to achieve a goal of some kind. Whether it be Daffy Duck on a hunt for treasure, Tweety outrunning Sylvester, or the Road Runner attempting to thwart Wile E. Coyote's latest hairbrained attempt to capture him.

The game was re-released for the Game Boy Color in 1999 with updated color graphics and new bonus games.