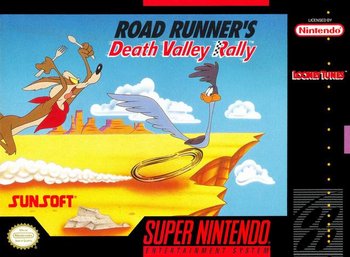 A Platform Game developed by ICOM Simulations and published by Sunsoft for the Super Nintendo Entertainment System, Road Runner's Death Valley Rally was about the titular race, between Wile E. Coyote and the Road Runner, with the player controlling the latter. While theoretically simply a race, Wile E. naturally cannot resist the urge to finally catch the Road Runner and turn him into dinner. The player, in control of the Road Runner, is out to complete the race and not become dinner.
Advertisement:

Pretty much a love letter to the classic Road Runner shorts, with many of the original gags recycled for this game, sometimes with new twists. The game did rather well, which led to further video game reimaginings of classic Looney Tunes in the form of Bugs Bunny: Rabbit Rampage, Daffy Duck The Marvin Missions, and Looney Tunes Acme Animation Factory, as well as an adaptation of a more modern take with Taz-Mania (Sunsoft).