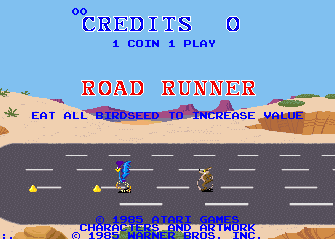 Road Runner, that Coyote's after you; Road Runner, if he catches you, you're through!
Advertisement:

Road Runner, an arcade game based upon the Wile E. Coyote and the Road Runner cartoons, was released by Atari in 1985 and later ported to several other formats. The goal is simple: Guide the Road Runner around the New Mexican desert to eat as much bird seed as possible whilst avoiding Wile E. Coyote's tricks and traps, oncoming traffic, and other environmental hazards.