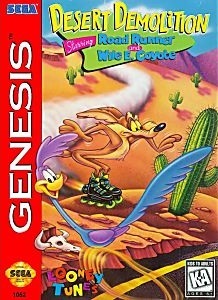 The game is a platformer homage to the classic Road Runner cartoons directed by Chuck Jones. The game gives you the choice of playing as either Wile E. Coyote or the Road Runner himself, and both have very different playstyles, with Road Runner's putting emphasis on speed and finishing the levels as fast as possible under a tight time limit, while Wile E's playthrough puts more emphasis on using his various ACME gadgets to finish a level and try to catch the Road Runner. The sprites were also traditionally animated rather than being standard pixel art sprites to keep the look of the cartoons down, and the background art and carefully synchronized music matches the style of the films to a tee as well.

Not to be confused with Desert Speedtrap Starring Road Runner & Wile E. Coyote for the Sega Master System and Game Gear in 1994, or Road Runner's Death Valley Rally, developed for the Super Nintendo Entertainment System by Sunsoft in 1992.