When All Else Fails, Go Right 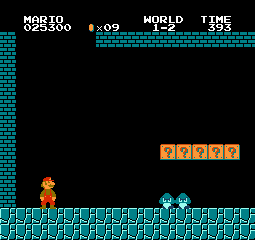 Wait, I get it, you need to blow down that brick wall somehow.
Advertisement:

Two-dimensional platformers often have a very straightforward start-to-goal direction; usually, you travel to the right. Much of the time, however, there are some options in your path, leading to this video gaming axiom: When All Else Fails, Go Right. In some games (say, Kid Icarus), it's occasionally recast as Go Up; much more rarely, it becomes Go Left or Go Down.

Games of the Metroidvania set tend to slip around the edges of this trope from time to time; much of the time, the goal is to the right of the starting point, but it does occasionally find itself on the left hand side of the map as well. In the more level-based games of the genre, this can vary with the stage; in the more free-form games, expect some serious variation.

While there might be something stopping you, at least temporarily, you know (because you're Genre Savvy) that your goal is on the right side of the obstacle.

This may be partially a result of cultural indoctrination, with the assumption that, as text usually progresses from left to right, so should progress through a game stage.

Exploited by many savvy platformer designers who build hidden collectibles into their levels. A collectible is often hidden just to the left of the starting position. Taken even further, a Trickster Game may exploit this trope in order to hide the means to progress or to reach the Golden Ending.

gives examples of the trope through the years. Set to music.