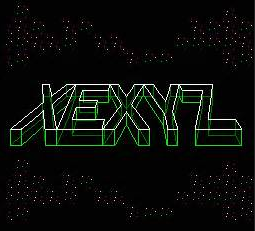 A 1988 video game for the NES developed by Atlus and published by Hudson Soft. Originally released in Japan as Kame no Ongaeshi: Urashima Densetsu ("The Turtle Returns: The Legend of Urashima").
Advertisement:

You play as Apollo (Urashima in the Japanese original), a warrior in a white spacesuit with a visor that looks like a duck's bill, as you make your way from island to island in a post-apocalyptic Earth, fighting off bizarre aliens and robots and rescuing a bevy of princesses from their clutches. A variety of special weapons help you on your journey, while aircraft called "cyborg riders" take you from one locale to the next as you try to rescue Princess Maria Star from the alien Goruza. Along the way, you meet fairies, disembodied heads, the spirit of King Xu Star, friendly frog-ladies, robot shopkeepers, and giant women in hot tubs. The kingdom of Xexyz depends on you!

Needless to say, it's a bit strange.