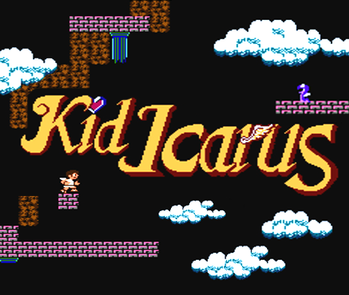 "Will Pit be able to restore Palutena's light and return it to Angel Land?
Only you can answer that question."
— Digital instruction manual for 3D Classics: Kid Icarus
Advertisement:

A series of platformer/shooter games made by Nintendo, known by the title Hikari Shinwa: Parutena no Kagaminote Myth of Light: The Mirror of Palutena) in Japanese. They take place in Angel Land, though largely influenced by Classical mythology, in which a Goddess named Palutena (either a mistransliteration of "Parthena", or a portmanteau of Pallas-Athena) rules the heavenly Skyworld and Medusa rules the Underworld. Medusa invades Skyworld and kidnaps Palutena which leaves her Kid Hero bodyguard, the erstwhile angel Pit (artistically based on the putti and Cupid), to escape from the Underworld, gather up the three sacred relics, and defeat Medusa and her legions of demons, a few of which were inspired by Greek/Roman mythology, and... life-energy sucking aliens called Komaytos, which aren't even trying to hide the fact that they're based on Metroids (the game was designed by Metroid creator Gunpei Yokoi, used the same engine, most of the development was done by Toru Osawa who also worked on Metroid and, in international releases of the first game (except the 3D Classics Updated Re-release, which has a save feature worldwide), similar password systems are used for resuming games).

It was followed by a sequel for the Game Boy (Kid Icarus: Of Myths and Monsters) in which Pit had to train himself to use the sacred relics once more to defeat an invading army of demons lead by Orcos. The character also starred as a member of the Five-Man Band of Captain N: The Game Master. After that, the series dropped completely off the radar for over ten years, despite a small but regular desire for a sequel pretty much since the days of the SNES.

Then Pit was included in Super Smash Bros. Brawl, complete with a radical makeover, and the crowd went wild. A new title, called Kid Icarus: Uprising, was released for the Nintendo 3DS in March 2012, using and expanding on the character redesigns from Brawl and giving new personalities and voices to many of the characters. The gameplay retained its shooter aspects, but shifted to a 3D third-person perspective, and gave Pit access to many more weapons and powers. Pit would then return for Super Smash Bros. for Nintendo 3DS and Wii U, along with Palutena (in her first playable appearance) and Dark Pit, a new character from Uprising; naturally, many of the elements from that game found their way into Smash. All three games were headed by Masahiro Sakurai, with both the Smash and Kid Icarus series tying into each other pretty well at that point.

Put all tropes specific to Uprising on its own page.

Tropes that apply to the first two games: