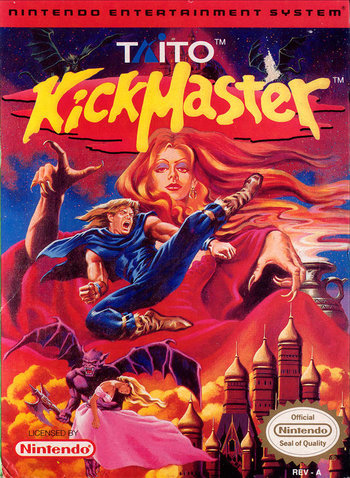 KickMaster is a 1992 Platform Game for the Nintendo Entertainment System. It was one of several action games for the system developed by the Japanese company KID for U.S. publisher Taxan, but was instead released by Taito after Taxan went out of business.

The game stars a martial arts master named Thonolan, who lives in the Kingdom of Lowrel. The evil witch Belzed sends her monstrous forces to conquer Lowrel, killing the King and Queen, and kidnapping Princess Silphee. In retribution, Thonolan and his partner Macren attack one of Belzed's minions, but the minion strikes down Macren. With his last dying breath, Macren inspires Thonolan to continue without him, for his martial arts and magic is the kingdom's last hope. Thonolan swears vengeance against Belzed and sets off on his quest.

KickMaster is a 2D Platformer. You take control of Thonolan as he battles Belzed's minions with his kicking abilities. But kicking isn't all Thonolan can do to survive. Along the way he will learn different magical spells that give him an extra edge, like health restoration, magic projectiles, flight, and more. There are also some slight RPG Elements, as Thonolan can gather experience from killing enemies to level up and learn more advanced and powerful kicking moves.