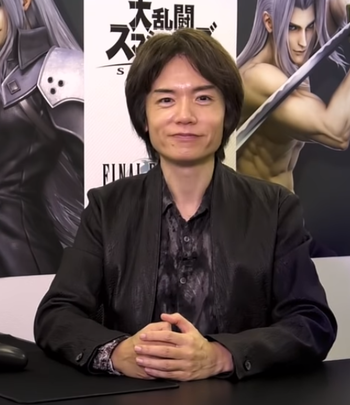 Masahiro Sakurai (born August 3, 1970) is a Japanese video game developer. He is the head of Sora Ltd., and creator of both the Kirby and Super Smash Bros. series. He created Kirby under HAL Laboratory when he was only 19 years old. Seeing how it was the nineties, and most of Nintendo's games were infamous for their difficulty, Sakurai designed the original Kirby's Dream Land to be relatively easy so players wouldn't be alienated by the game being too hard. He directed a number of Kirby titles from there, playing a smaller and smaller role in development as time went on, culminating in him simply voicing King Dedede in Kirby 64: The Crystal Shards. He worked closely with the staff for the series' anime, Kirby: Right Back at Ya!, and he also worked as the designer on Kirby Air Ride, which was his final game in the series.

Sometime after the development of Kirby Super Star, Sakurai wanted to make a fighting game. It was developed again by HAL Laboratory, but during their spare time, with a shockingly small budget. He wanted to make it different from the others; not with combo based combat, and with simultaneous four player gameplay. Originally called Kakuto-Gemu Ryuonote Dragon King: The Fighting Game, he felt it was somewhat bland. However, he added in characters from various Nintendo franchises, and the game was released as Super Smash Bros. in 1999. The game was a Sleeper Hit, and the game intended not to even leave Japan's shores was localized, where it also did well. Over the following few years, Sakurai made Super Smash Bros. Melee before his resignation, which he stated was due to HAL Laboratory continually making sequels. It looked as though he wouldn't make another game in the series, forming his own company, Sora Ltd., and working on original titles, such as Meteos, until he was approached by his good friend and president of Nintendo, Satoru Iwata, who persuaded him to make Super Smash Bros. Brawl. During development, characters, items, and stages were posted on the official website,

leading to fans eagerly awaiting possible character reveals. The event was dubbed "Japan Time" by fans and remains one of many fans' most memorable times.

From there, Iwata and Sakurai wanted to work on an original game with both land and air combat for the Nintendo 3DS, but they realized that the Kid Icarus series would be a perfect fit, with its protagonist Pit and the goddess Palutena already having been given redesigns in Brawl. Kid Icarus: Uprising has been generally praised as a must have for the system, becoming its Killer App for early 2012.

At E3 2011, it was announced that Sakurai would be developing two new Super Smash Bros. games, one for the Wii U and one for the 3DS. Although he was uncomfortable with announcing a game before development had even startednote he said he wouldn't start on the games until his work on Uprising was finished, which was around February 2012, but it allowed staff to be recruited. Around summer 2012, it was announced the game would be produced by a joint effort between

He also has stopped tweeting as frequently

in order to focus more on the games' development, and also because he grew tired of posting a game and fans instantly thinking the characters would be in the next Super Smash Bros. title.

The English-speaking Super Smash Bros. community calls him "Daddy Sakurai", to the point that the nickname was adopted/translated by other language-speakers as well (for instance, part of the Japanese community calls him "Sakurai-papa"). Also common are jokingly-created Mondegreens of his actual name, such as "Mashpotato Samurai" and "Massive Hero Soccer Guy".

Works Sakurai has been involved in: