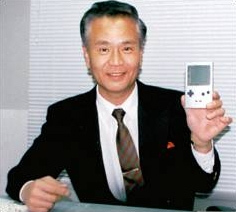 Gunpei Yokoi with his most famous invention (which even has another one of his on it!).
Advertisement:

Gunpei (sometimes Romanized "Gunpey" or "Gumpei") Yokoi (September 10, 1941 – October 4, 1997) started out as a simple designer for a card company that had since spread out to produce toys of other varieties. One day, he saw a passenger on a train fiddling around with a simple LCD calculator. He had a brilliant idea from that - what if, in addition to keeping track of time as an LCD watch, the device could also play a simple game? He pitched the idea to his employer, Nintendo.

The product became the Game & Watch, and Yokoi's star was on the rise. He was moved into working on other electronic games, as Nintendo figured that he'd come up with a few more good ideas along those lines.

Perhaps his greatest breakthrough came when Nintendo decided that they would jump into the console market themselves, after seeing how much money could be made from owning the platform and not just licensing games on it. Yokoi looked at the then-common joysticks used for games and decided this wouldn't do at all. They were prone to snapping and were excessively bulky. His innovation was the flat control pad used by the Nintendo Entertainment System — so popular and prevalent, only specialty controllers like the ones made for Guitar Hero can not be said to be an evolution of his basic design.

Because this apparently wasn't enough creative output for a guy like Yokoi, he also came up with a couple of game franchises... Metroid, Kid Icarus, and Fire Emblem were also his idea. He helped develop the Famicom Detective Club games alongside his protege Yoshio Sakamoto, which would serve as an influence to later mystery/adventure games in the Turn of the Millennium. He also was one of the earliest creators of puzzle games, with Dr. Mario and Panel de Pon (which has been released under multiple names, including Tetris Attack, Pokémon Puzzle League, and Planet Puzzle League) also to his name.

After this, Yokoi turned his attention back to portable gaming. With technology moving forward like it had, he figured that it was time to update the Game & Watch platform to become a true portable gaming system, with interchangeable games. And thus was born the Game Boy, which is up there with the NES controller in terms of all-time influential developments (many eloquent discussions have occurred regarding which is more significant). Along the way, he also worked on the Super Mario Land series, which introduced Wario and Daisy to the Super Mario Bros. universe.

Things were going great for Yokoi, but he was ready to move on to greater things. As a parting gift of sorts, he planned to release the Virtual Boy. However, Nintendo rushed the development of the Virtual Boy, leaving it to become the disaster it was known for. It was an unlucky coincidence that the system failed around the time he planned to leave and, instead, stayed behind longer so it didn't look like he was admitting defeat by the system's failure (though he was treated as a persona non grata during his remaining time and was made to man the booth at a trade show, an entry-level job in Japanese corporate culture that seemed humiliating for someone of his stature). His last major contribution was the Game Boy Pocket, a revised model of the original Game Boy that gave it a clearer screen, better battery life, and a smaller, more accessible form factor. Following this contribution, he parted ways with Nintendo for real this time, though the failure of the Virtual Boy remained an albatross around his neck (and to this day is often misattributed as the cause of his departure).

After leaving Nintendo, he went to form Koto Laboratory, working as a consultant of sorts for Nintendo. While there, he began working on a project for Bandai known as the WonderSwan.

Unfortunately, Yokoi never lived to see the results of that. While slowing up near a traffic accident, another car plowed into his, killing him at the scene. The WonderSwan was released posthumously only to be swiftly crushed in the marketplace by Nintendo's Game Boy Advance, never getting the opportunity to leave Japan. Yokoi's death was a considerable shock to the gaming industry, as it made him the first major figure from Nintendo's history as a game development company to die.

For a long time, the failure of the Virtual Boy dogged Yokoi's name among gamers who knew who he was, though his successes with portables have since redeemed him (not-so-coincidentally rising with the popularity of portable platforms). One of his last projects has subsequently been released as Gunpey for various systems, and Nintendo has gone back to praising the late Yokoi's contributions (while all but throwing the Virtual Boy into Canon Discontinuity).

Software titles which Gunpei Yokoi worked on directly include: