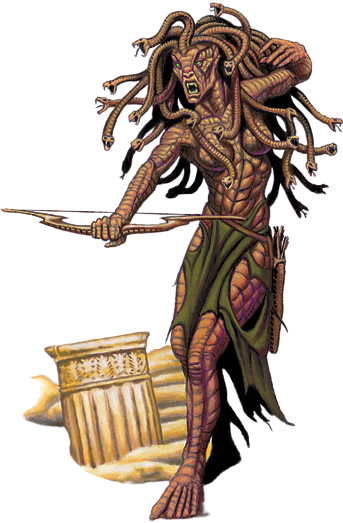 Originally a character in Classical Mythology, Medusa has taken a life of her own, and now exists in all kinds of fantasy — sometimes as a person, sometimes as an entire species. Medusa's main characteristics are snakes for hair and that people turn to stone just by seeing her face. So don't look at that illustration. note All bets are off, though, if she is of the Gorgeous Gorgon resp. Cute Monster Girl variety. Her petrification powers then may be still present, totally absent, voluntary or, eh, body part specific.

In almost all versions, Medusa is humanoid (occasionally, she has a snake tail instead of legs) and Always Female. In some versions, her hair-snakes are venomous. In others, they are not literal snakes but rather hair that supernaturally behaves as if it were made of living snakes. When a version contain a male Medusa, it's usually some Spear Counterpart with some other name. Medusa's appearance varies depending on what source you're reading. The most popular is that of a hideous monster; in fact, the petrification originally was caused by Medusa's ugliness itself, before other myths retconned it into being a power based in her eyes. Other myths say that Medusa retained her mortal beauty, as a cruel Irony. And then there are some that offer a compromise and state that she was both beautiful and terrible at the same time.

The oldest story known to feature Medusa is the adventures of Perseus. In this story she is a powerful monster whom Perseus defeats by decapitating her (and later using her head to petrify enemies) without looking at her — he sticks to looking at her shadow or looking through a mirrored shield, depending on the version.

Myths and stories with background for Medusa were added later. There are two different such prequel myths regarding the origins of the original Medusa. When Medusa is used in fiction as a unique being rather than as a species, she is typically given either one of these two origins, or no origin at all.

The ancient Greek origin is that she and her fellow Gorgons were simply created/born that way. In this origin, the Gorgons are typically three sisters, the other two being Stheno and Euryale. The Greek word "gorgon" means "horror". Besides having serpents for hair, the Gorgons were described as having tusks, brazen claws, wings and strongly acidic blood; in a few very early depictions they are shown as quadrupeds, possibly because Pegasus was born out of Medusa's blood when she was beheaded by Perseus. Later depictions (although still fairly ancient ones, in the absolute sense) gradually toned down the more monstrous aspects and made her more attractive. Note that the Erinnyes (Furiae) were depicted very similarly as hideous snake-haired women.

Much later, in the first decade AD, the Roman poet Ovid wrote a different version where Medusa was a virgin priestess of Athena, but her incredible beauty attracted the attentions of the god Poseidon. Depending on the version of the story, she either reciprocated, and (with a little help from her sisters) let Poseidon into Athena's temple and slept with him on the altar, or was simply raped by the god. In both versions, Athena, pissed that her priestess not only broke her vows but did the nasty in her temple, punished her by turning her into her new hideous form and banished her to a desolate island until Perseus slew her.

Medusa's popularity is somewhat Newer Than They Think. She doesn't appear that often in media made before the 80s. Clash of the Titans (1981) (mentioned below) featured her as one of the monsters — and it has been said that modern generations owe their knowledge of Medusa to the film. The other two sisters appear extremely rarely, but are sometimes included alongside Medusa when she's a singular character.

The Gorgon sisters as a whole are the Trope Namer to Gorgeous Gorgon. Some of the Gorgons' depictions make them Snake People.