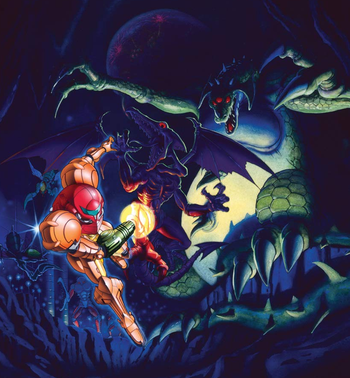 For True Peace In Space...
"See you next mission!"
— Samus Aran
Advertisement:

Metroid is a series of games produced by Nintendo that began in the 1980s, and is best known for being the Trope Maker for the exploratory Metroidvania genre. They star the armored Bounty Hunter Samus Aran, with most installments revolving around her interactions with dangerous energy leeches called Metroids and her quest to annihilate the Space Pirates that plague the galaxy and killed both her human birth parents and adoptive bird-like Chozo family. Gunpei Yokoi (the mind behind Nintendo's early portable gaming hardware like the Game & Watch and Game Boy) and Yoshio Sakamoto (who would go on to produce the WarioWare and Rhythm Heaven series) are often the most credited for the franchise's creation.note To paraphrase The Other Wiki, the core creative team that birthed the series consisted of Satoru Okada (created the basic concept of the series as being the "anti-Mario"), Yoshio Sakamoto (character designer who was "forcefully asked to participate" in the creation of the first game, only to become the overseer of the franchise going forward), Makoto Kano (scenario writer), Hiroji Kiyotake (character designer), and Gunpei Yokoi (who headed the R&D1 division and thus served as the producer).

The Metroid franchise is somewhat unusual among Nintendo's library for its substantial continuity, and holds the honor of being one of the first Platformer franchises to showcase an explicit overarching story. Case in point, the first game, released in 1986 on the NES, deals with Samus's assault on the Space Pirate base on Zebes, where she first encounters the Metroids. After defeating the Space Pirates' leader, Mother Brain, Samus is dispatched in the (Game Boy) sequel, Metroid II: Return of Samus (1991), to hunt down and exterminate the species on their home world. The end of this game segues directly into (Super NES) Super Metroid (1994), where the final larval Metroid is stolen by Space Pirates who take it to a rebuilt base on Zebes.

The series lay dormant for years afterward, skipping the Nintendo 64 entirely (outside Samus being a fighter in Super Smash Bros.), primarily because series director Yoshio Sakamoto had no idea how to follow up Super Metroid, which decades later is still regarded as one of the best games in the genre. It didn't help that the other creative force behind the series, Gunpei Yokoi, was no longer available, having left Nintendo following the debacle that was the Virtual Boy. As the lead designer of Nintendo's most notorious flop, he took responsibility for it and left the company of his own volition.note Though to be fair, he was planning to leave Nintendo regardless. The Virtual Boy just meant that he found himself doing so on a sour note. Tragically, he was killed in a traffic accident shortly after in 1997, robbing the game industry of one of its greatest creators.

Come the Turn of the Millennium, however, the Metroid series would not only make its return, but also find itself branching in two different directions. One path would continue to follow the franchise's side-scrolling roots and lean into its Alien inspirations, showcased with the release of Metroid Fusion (Game Boy Advance) in 2002. In it, the Metroid home world had become overrun by shape-shifting X parasites that the Metroids had actually been keeping in check before Samus drove them to extinction. After a life-threatening run-in with one of these parasites, Samus finds her life saved by a vaccine containing what remained of the infant Metroid from Super. The resulting mission to contain the x parasites on a nearby research station resulted in the most linear but dynamic game in the series up to that point.

At the same time, Nintendo had made the controversial decision to move the series to 3D on the GameCube, with American Retro Studios at the helm. Metroid Prime emerged as an unusual FPS-adventure title, set between the first and second games. While the shift to becoming an FPS was initially met with confusion and doubt from fans, and raised concerns that Nintendo was merely trying to leverage the series to compete with Microsoft's Halo: Combat Evolved (which was shaping up to be a Big Deal, even during development), the result won fans over and received much critical acclaim, including "Game Of The Year" awards from many publications. Most of the maze like tunnel game play from Super Metroid was retained, and reviewers found new content to make up for what wasn't kept in transition.

The original Metroid was remade for the Game Boy Advance a year later as Zero Mission. Zero Mission was less open ended than the original at first glance but allowed siginificant Sequence Breaking and added a new epilogue that expanded on our heroine's backstory for the first time in-game, revealing that the Space Pirate homeworld of Zebes not only used to be occupied by the Chozo, but was also where Samus spent her formative years. Meanwhile, the 3D installments would become a franchise in their own right, overseen by Kensuke Tanabe (who had previously worked on the Super Mario Bros. and The Legend of Zelda series) with varying levels of input from Sakamoto. Prime was succeeded by Metroid Prime 2: Echoes (GameCube) and Metroid Prime 3: Corruption (Wii), which continued and concluded the first game's Phazon storyline, with only a brief aside for a handheld adventure via Metroid Prime: Hunters (Nintendo DS). Or so it seemed, until another spin-off game (Metroid Prime: Federation Force for the Nintendo 3DS) released in 2016 to lay the foundation for Metroid Prime 4, which was announced the following year. Prime 4 was initially victim to a Troubled Production, and currently has no given release window. Tropes exclusive to this sub-series belong here.

After Corruption, Sakamoto would give 3D a try himself with 2010's Other M (Wii), an Interquel taking place between Super and Fusion which attempted to combine gameplay elements from both the 2D games and the Prime series, and forwent the franchise's usual use of Story Breadcrumbs in favor of a heavier focus on story and more linear progression than even Fusion. It was developed by the unusual combination of what remained of the in-house team responsible for the Metroid seriesnote (after the release of Zero Mission, Nintendo's R&D studios — which included the 2D Metroid team — had been restructured to serve a supervisory role over external projects rather than create their own) and Koei Tecmo's Team Ninja studio. The final product was poorly-received by fans, causing the franchise to take a brief hiatus until the release of the aforementioned Federation Force. 2017 would see the mainline series return to 2D (well, now 2½D), with Sakamoto's team now working alongside MercurySteam for Samus Returns, a remake of Metroid II for Nintendo 3DS. Samus Returns, like Zero Mission, added additional story content: this time setting up vital plot details for 2021's Metroid Dread for the Nintendo Switch, the long-awaited sequel to Fusion that had gone in and out of production for the past two decades. Concluding the storyline revolving around our heroine's relationship with the eponymous creatures, the game sees Samus investigating the far-off planet ZDR for any remnants of X parasites, only to find herself attacked by a mysterious Chozo warrior and hunted down by seemingly defective Federation robots in the process.

Across the entire franchise, a number of characteristic elements have persisted, such as the continuous string of upgrades which Samus acquires over the course of the game, most notably the "Morph Ball" (or "Maru Mari," one of several translation oddities), which allows Samus to roll into the shape of a small ball, for better maneuverability in areas where this shape is more convenient.

Being the codifier, this is one of the two best known series of the Metroidvania genre — Action-Adventure/Platform games with an emphasis on exploring a continuous non-linear world and finding powerups to advance. Technologically, the original Metroid is noteworthy as one of the first multi-direction scrolling platformers. Its North American release was also the first game to use a password system to save progress. The Japanese release of Metroid for Nintendo's disc-based system allowed the players to save their progress on the disc; the cartridge-based US system lacked this ability, so the game presented a 24-character password which encoded the state of the game, allowing the player to resume his or her progress later. This also (unintentionally) allowed players to "hack" the game, giving Samus various upgrades upon starting the game if the correct values were put into a password.

The ending of the original Metroid is a Tomato Surprise: if the player did sufficiently well, they are then treated to a stunning-for-its-time revelation: Samus Aran's armor is removed, revealing the bounty hunter to be a shapely woman (by 8-bit standards). This reveal is also in most of the other games, although no longer a surprise. Those who Read the Freaking Manual would see that Samus is openly referred to as female by Metroid II.

Though Samus herself has never appeared on television (except in commercials), Mother Brain was featured as the Big Bad of the Nintendo-themed animated series Captain N: The Game Master. (Reportedly, the production staff actually didn't know about Samus); the comic book adaptation introduced her as the Sixth Ranger/The Lancer. A live-action feature film based on the franchise was optioned after Metroid Prime was successful, with John Woo of all people rumored to direct, but appears to have lapsed. By the tail end of The New '10s, however, some in Hollywood have expressed interest in pulling the film out of Development Hell, including Ronda Rousey, Jordan Vogt-Roberts, and Brie Larson. Only time will tell if the movie ever gets made.

The Metroid series provides examples of:

open/close all folders
#-K
L-Z
The End
SEE YOU NEXT MISSION!
Feedback