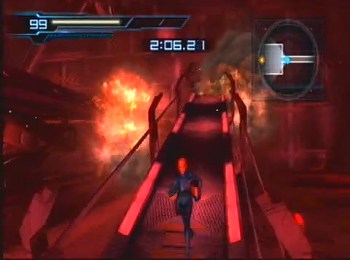 Why is Stuff Blowing Up if we still have two minutes left?
"Thank you for activating the self destruct mechanism. This ship will detonate in three minutes. In the meantime, please enjoy some random explosions and blasts of steam. Human Resources thought it would make things more dramatic than a red light and a klaxon."
— Ratchet & Clank (2002)
Advertisement:

An area is exploding and falling apart, because a timed explosive has been set. Even though that explosive hasn't gone off yet, it's causing the rest of the area to blow up as well.

This combines for Rule of Drama two things that you'd logically expect to be mutually exclusive: the Exact Time to Failure of a carefully planned detonation people are intended to escape from, with the Stuff Blowing Up of an out-of-control chain reaction or random system failure. It can also be seen as a justified variation on Outrun the Fireball — much more plausible to run away from a succession of small explosions than a single huge one.

The bomb is usually on a short fuse. If the bomb dooms the villain, a Catastrophic Countdown ties in naturally with a Collapsing Lair. While this trope usually serves the need to make the danger a bit more visible, it is not unreasonable for a Self-Destruct Mechanism to destabilize before it obliterates.

You have two minutes to read examples of this trope!