Sound of No Damage 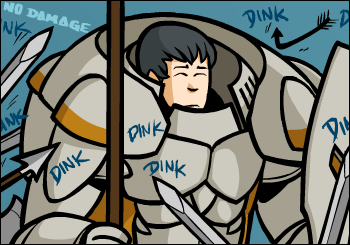 I can't hear myself think over all this No Damage!
"Fool! My traps are protected with an indestructible alloy! I shall laugh as your pathetic attacks bounce off with a cutesy "clink" sound! Mwa ha and ha!"
— Kobayashi, Kid Radd
Advertisement:

Most Video Games use one or two sound effects to punctuate the inflicting of damage against an enemy. And then there's a special sound effect used to warn that an attack has been repelled, blocked, or otherwise failed to affect the target. This is a case of Sound-Coded for Your Convenience (as a clue to stop wasting your attacks), and may involve Arcade Sounds.

The Sound of No Damage is largely associated with projectile weapons (think of that "bullet ricochet" sound from any Old West film, for example), but can also occur with melee weapons — expect to hear this a lot when facing the Shield-Bearing Mook or if testing whether an element of the environment (like that cracked wall or oil barrel) really is or is not destructible.

This is common in Platform Games and Shoot Em Ups, and a high-pitched, metallic or hollow "ping" is the most popular sound effect used, but a blunt "thud" is also fairly common, and some games may opt for a deliberately humorous sound effect to mock the attacker. For Fighting Games, a similar "thud" sound may occur, although in their case it's more often a Sound of Scratch Damage.

Often, this sound effect will also be accompanied by a special visual effect, such as the projectile visibly deflecting from the target, or (for melee attacks) a special recoil animation as the attacker's strike bounces harmlessly off. Other accompanying clues may include the absence of a Flash of Pain, or a "Guard" or "No Effect" message in place of normal damage numbers.

If not described otherwise, most examples are simply a simple "ping" sound with no accompanying visual effect.